It’s a small world we live in and surprisingly the running world (ultramarathon community especially) is even smaller.  Run a race or two, post about it on social media and sooner or later a new friendship will take root.

Once such friend took on the TransRockies 2018 adventure run and I wanted to know more.

Thank you, Joe, for agreeing to take part in my blog interview.

Let’s start off by providing my readers a small look at your running career.

I wasn’t a runner in high school or college.  Actually, my school was K-12 and only had about 600 students total, so we were too small for organized running sports.  When I joined the Air Force shortly after graduation, I ran just enough to meet my annual fitness standards.  I got serious about running late in life when I was about 48.  That may seem hard to believe, but that was when I finally had the time (and money) to get really serious about running.  Since that time, I’ve completed 32 marathons and 39 half marathons, including the 2015 and 2018 Boston Marathons and 2015 and 2017 TCS NYC Marathons.  With respect to ultra distances, I’ve completed the TransRockies Run, 120-mile, 6-day stage race four times, one 50-miler and four 50K races.

We connected somewhere along the Information Superhighway as I remember…Facebook, Twitter etc. and discovered we had something in common besides running, service to our country.  Could you tell us a little about your military career, and THANK YOU for your service. 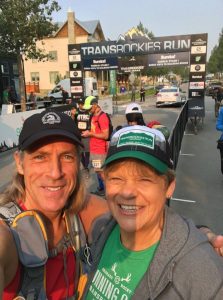 Thank you, Brian, and thank you for your service as well.  Honestly, I don’t recall exactly how I first connected with you.  I know we have mutual Air Force friends, so it’s likely that one of your posts caught my eye through one of them.  As you well know, through military service, we all become one huge family, so from the first time I met you, I felt as if we’d known each other all our lives.

I joined the Air Force right out of high school.  My wife and I were already married and I was still too young to get a decent job that would support a family.  The Air Force seemed like a logical choice.  For the next 20 years, we traveled the world stationed in some great locations, including more than 7 years overseas in Japan and England.  My Air Force career ended in 2000 while stationed at Whiteman Air Force Base in Missouri.  We’ve lived in Missouri ever since.

We crossed paths in the real world in of all places in Leadville, Co.  If I remember right it was at the packet pickup for the 10k race the Sunday before the 100-Miler.  Why were you in Leadville? 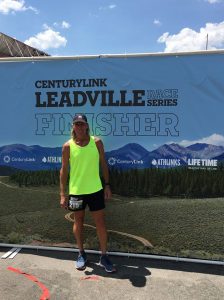 Yes, that’s correct.  You had posted on one of your blogs that you would be a packet pick-up, so I intentionally looked for you there.

My wife and I were in Leadville for the week prior to the Leadville Trail 100 getting acclimated for the TransRockies Run (TRR) which kicked off in Buena Vista just south of Leadville on August 14.  I ran the Leadville 10K just for fun on that Sunday before TRR.

The Transrockies Run is one of those running adventures that I watch from afar.  It has been on my “list” for a while.  The whole concept sounds challenging and entertaining.  The TransRockies Run is a trail running stage race also known as “Summer Camp for Big Kids!”  A six-day stage race traversing the continental divide between Buena Vista and Beaver Creek, the route covers 120 miles through the spectacular Colorado Rockies with stunning fourteener views all along the route.  At the end of each stage, runners gather in camp to recover, socialize and celebrate.  Fully supported with tents, luggage service, mobile shower truck, catered meals, and massage.  TransRockies Run sounds like a running vacation where you will make memories and friendships that last a lifetime.

Why did you decide to run this race? 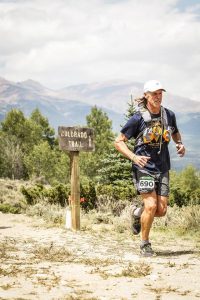 (Not sure I’ve seen a better running picture)

I first ran TRR in 2014.  I registered shortly after completing my first (and only) 50-miler, the Bison 50, which ran from Topeka to Lawrence, Kansas, on a combination of paved and unpaved surfaces.  I had done a number of road races by then and was looking for something a little different.  I saw an advertisement for TRR and it looked like something I could handle since it was staged over six days.

What was your favorite part of the TransRockies run?

Having done the race four times now, both solo and as a team with my son in 2014, my favorite part of the race without a doubt is the people you meet during the week-long event.  We’ve got friends we met at TRR in 2014 who still return year after year.  TRR is like family.  It’s hard to understand unless you’ve actually been there.  TRR is a race, and there are stage winners, age-group winners, and overall winners, but at TRR, no one gets left behind.  Whether you’re the first one in for the day, or the last, your victory is celebrated by everyone.  I recall one year in particular at the end of Stage 3 from Leadville to Nova Guides at Camp Hale.  One couple was still out on the course and everyone else was finished, showered, and already eating dinner.  We got a heads up that the last couple was on their way in to the finish line and the entire catering tent emptied out.  Everyone lined both sides of the finish chute, arms raised high, and made a tunnel to welcome them in.  The cheering was so loud.  The entire experience was very emotional.  That’s what makes TransRockies special.

What stage did you find the hardest?

That’s a tough one.  There are two stages that I find harder than others.  Stage 1 runs from Buena Vista to Railroad Bridge and is just under 21 miles with 2,500 feet of elevation gain.  This stage is always hot with a lot of exposure to the sun.  Additionally, much of the trail is sandy with the final four miles on a false flat, gravel road.  Additionally, since it’s the first stage of the race, if you’re not properly acclimated, it can be rough.  Personally, I also find Stage 6 to be a little challenging.  This final stage from Vail to Beaver Creek runs about 22.4 miles with approximately 5,250 feet of elevation gain.  Although you know the celebration awaits you at the finish line, this stage is also typically warmer than other stages and includes a combination of some pretty significant climbs and descents as well as a good amount of paved road and trail.  Some might think that Stage 2 which takes you from Vicksburg to Twin Lakes up over Hope Pass at 12,500 feet would be the hardest, but it’s actually one of the easier (and shorter) days at just over 13 miles.  Additionally, the shorter day allows you to spend some time in the historical town of Leadville prior to the start of Stage 3 the following morning.

The good thing about this race though, is that it’s a race most everyone can handle, regardless of their trail running experience.  Don’t get me wrong, parts of the course are definitely challenging, but the time cutoffs are very generous and the stages are broken down where everyone can successfully finish the race.

As an outsider looking in, I’ve always believed the non-running gathering of the TransRockies event may be as entertaining as the run.  Can you give us a look into the experience at the camps?

There’s no doubt that the time spent with other runners at the end of each stage is what allows you to forge lifelong friendships.  The TRR staff and volunteer crew do everything they can to make it an unforgettable experience.  As you may know, the event is fully supported starting at the end of Stage 1.  When runners arrive at camp each day, tents are already set up and ready to go.  After a hot shower in the mobile shower truck, most people relax in “Chillville” with snacks and drinks until dinner time.  Meals, both breakfast and dinner, are fully catered and provide a great variety of options for almost every diet.  After dinner, runners get a quick course briefing for the following day, some photo highlights of that day’s stage, and then they’re off to get some rest.  Medical services are always available in camp and massages are available for a small fee.

Are there any negatives to running 120-miles over six days with a bunch of people you just met?

Absolutely not.  TRR runners come from all over the world.  Nearly every state and more than 20 foreign countries are typically represented.  Everyone is there for the same reason—to run some good trails through the mountains and have a good time.  There really are no strangers, just new friends you haven’t met yet.

Do you plan to run the event in the future?

There’s no doubt I’ll run TRR again, it’s just a matter of when.  There are a couple of races I’m looking at next summer, so we’ll see how the schedule works out.  I may very well be back in 2019!

To someone who is interested but may be sitting on the fence deciding to run TransRockies, what would say to them?

I’d say get signed up, start training, and stay healthy.  No one should ever think they can’t do it.  It’s just a matter of making the commitment and getting started.  TransRockies is like no other race I know.  Every runner should experience it at least once in their life.  If it’s a matter of cost that’s got you on the fence, TRR has recently announced a payment plan for the 2019 race.  To my knowledge, that’s the first time this has been offered.  It’ll definitely make it easier for those on a budget.

Thank you so much for taking time and sharing your experiences with my readers.