A year like 2016 only comes around once in a great while.  In the national headlines, the year saw a monumental shift in the political tide while a number of hollywood and music legends passed from this earth.  For me personally 2016 saw numerous personal records fall and a  headline item get crossed off my bucket list.

January:  The third edition of Brian’s Crazy New Year’s Long Run was a huge success.  For the first time in the three history of this event we ran at Umstead State Park in North Carolina.  I started this training run in 2014 while preparing for my first 100 mile race.  In 2016 a small group of old and new friends hit the trails of Umstead.  Andrea a friend of mine from VA was set to take on her first 100 mile race.  We used this run as a tune up and tour of the 100 mile course.  Andrea became the first runner to complete all 50 miles.

(Andrea, myself and our friend Wendy during the 100 mile race)

Ending the month I planned to run the Miami marathon the day before departing on a cruise out of the port of Miami.  Four days before the marathon, two days before we were scheduled to fly out of Richmond, mother nature decided to shut down the east coast with a massive snow storm.  With flights cancelled we headed down I-95 South from Richmond, Va to Miami, Fla arriving just as the marathon signs were coming down.  January came to an end with 185 miles in the log book.

February:  As the hit song proclaimed “February made me shiver…” I decided to step down the racing milage,  Michele and I ran the Heart and Sole Half Marathon in Goldsboro, Nc.  Going into this race I had no real expectations, and had no real intentions of racing hard.  That last thru the national Anthem and on a cold and crisp morning I let it all hang out from the opening bell.  13 miles later a sub 1:40 half marathon was nearly in hand.

Amongst some crazy weather that included snow, high winds, and tornados I logged 182 miles.

March: Even with all the training, all the miles and all the race day goals expectations are sometimes still met with defeat.  I had targeted the Tobacco Road Marathon in Cary, Nc as a gold setting race since early in the fall.  I trained hard, I got mentally focused, and Wham.  I woke up Saturday morning, 24 hours before race day with a monster headache and my sinuses blocked up like the Hoover Dam.  I did whatever every ultra-runner would do….I avoided all reasonable advice and planned to run the race anyway.  With enough sudafed to dry up the swamps of Louisiana I set off on my quest for a sub-four marathon.

(Emmy Lou didn’t put in the hard work,
but she did claim the bling)

Closed the books on March with 160 miles.

April: A big part about ultra-running is the community.  We inspire, challenge, and support each other.  When Andrea asked if I would help her during her 100 mile race, it took me two seconds to tell her I would be there.  I ran the last 50 miles with Andrea as she battled through the night, the pain, and the ugly hours of ultra-running.  Andrea claimed her 100 mile buckle.  So proud of her…

Three other races in April including the Mountain to Sea 50k, Tar Heel 10 miler and my 7th running of the Virginia 24 Hour Run Against Cancer.   Finished the month with 232 miles.

May was all about the Grand Canyon, with tapering leading up to the run, travel, and recovery afterwards I logged 124 miles in May.

June:  I decided to sign up for The Bethel Moonlight Boogie 50 Miler late.  After mailing off the entry forms and personal check I talked myself into running it.  As I drove 3 hours away from home I thought I wanted to.  Within the first 15 miles of a 50 mile race, at the hottest part of the day, in the middle of the humidity of a June night in North Carolina…I called it quits.  This was going to be my 100th race finish, but it turned out to be my first Did Not Finish (DNF).

No other races, but a colonoscopy (I passed)…finished with 171 miles.

July: Took a little break from racing.  During a trip with our grandson to the Baltimore Aquarium I snuck out early on a Saturday morning to run a few miles around the Inner Harbor.

(Selfie in front of the US Coast Guard Ship Taney)

Not my favorite city for football reasons but the inner Harbor is a nice place to run, I logged 6.7 miles that morning and 200 for the month.

August:  A return trip to the Medoc Mountain Meltdown 50K plus.  On a hot and humid Saturday afternoon, the melt did what it’s name is famous for…it melted me down.  I ran three laps of a four lap event.  At the time I was in the lead pack of two runners when the heat just got to be too much.  Rolling into the aid station I called it a day.

On the heels of the melt down, I banked 224 miles for a strong month.

Sept: 24 hour races have had my number.  I’ve met a few goals along the way but I always seem to come out of those events beat up, injured in some cases, and short of running all 24 hours.  The 2015 Hinson Lake 24 Hour Race left me disappointed and confused on my running career.  With the collapse at Boogie and Medoc I went into the 2016 Hinson Lake race with a lot of questions.

(The wee hours at Hinson Lake)

Ended the month with 213 miles and the white whale is dead.

October: My 2nd running of the Medoc Mountain Trail Marathon.  A local favorite, this race has all the charm and character that big city marathons lack.  Last year I tripped and fell all over the place this year I ran a course/event PR.

Hurricane Matthew rolled into town, with high winds and steady rain the power lines came down and our little lake flooded its shores but I still managed to get in 205 miles.

November:  After my first running of the JFK 50 in 2014 I said I would never run this race again. In 2015 I returned with friends.  After a disappointing finish, I was beaten and defeated, I vowed never to return.  I had had enough of the AT with its rocks and hills.  2016 I found myself again facing the JFK and my desire for a sub 10 hour finish. 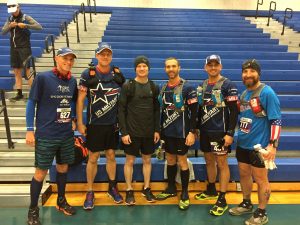 (Running with Team USMES.org a lot of PR fell that day)

November was a month they shall write stories about.  I scored three PRs in 18 days and logged 178 miles.

November also saw me complete a project I have been working on for two years.  I completed my first novel, Running to Leadville.  Why did I write this book?  I’ve long wanted to read a running book that would entertain, inspire, and share the ultra running community with the world at large.  I found that story hard to find so I wrote it myself.  Inspired by the Leadville Trail 100 this story is not simply a running story, it’s a story about life, love, loss, and overcoming the challenges of this world. Set on the stage of a 100 mile foot race in the extreme Colorado Rockies this story will be sure to grab your attention.

For more information on Running to Leadville click here.

December: Another month without a race, life just got to busy.  Although no racing success I did successfully pull off my third Christmas day reindeer run.

(Sometime you have to stop and take the selfie)

The end of December saw 238 miles get added to my total.

PRs for the year:

With an opportunity to look back and reflect on 2016 it’s hard to fathom how great a year it was.  I ran a lot of miles, I met a lot of people, I made great friends and I gave back to the running community.  Entering 2017 I’m healthy, I’m running well, and I’m looking forward to this year and beyond.

Check out my 2017 goals and race calendar here