I’ll be honest, I’m a sucker for race bling about as bad as anyone.  I like getting something to signify the accomplishment of running a race.  I understand it’s not an award for my stellar performance…it is a token of the accomplishment .  It’s a souvenir for “completing” a race.   Nothing more…nothing less. 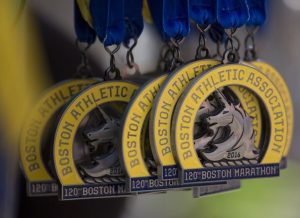 Some would say that receiving race medals is the same as every kid getting a trophy for completing a soccer season.  But I don’t believe so.  Most youth sports are competitive.  Standings are kept, the seasons are designed to produce a champion, and all star teams are selected.  In adult running their is a competitive side but 99% of those who enter a race have no shot at winning, myself included.  Our victories are not measured against the other runners but against real competition.

Our victories come against some of the toughest competitors in life, our work schedules, our family commitments, our health challenges, demons from our past and our genetics.

My issue comes in the latest internet meltdown over the runner who choose to “take” two Boston Marathon medals to give one to his wife.  Read the original story here and the update one here with an apology from the runner.

Did she deserve a token for all her commitment to her spouses goal, for her efforts in support of her husband reaching his goals?  I’m sure she did…

What bugs me is this is what is wrong with our society…where someone “choose” to take something because they thought they had a right.  He, this random runner, thought he had a right to something he did not pay for, deserve or was warranted.  This fellow runner wanted something and against all standards of right and wrong took it.  That is my issues.

I recently finished my second 100 mile race at the Umstead 100 Mile Endurance Run and by rule you do not get a buckle for multiple finishes.  This race only awards buckles for first time finishers.  I disagree with this rule after all I paid the same entry fee and I completed the same 100 miles as the first timers.  After 21 hours, 36 minutes and 36 seconds when the race director greeted me with a buckle in his hand, a buckle I wanted so badly…he asked me if this was my first finish.   I told him “this was my second.”  My heart sank when he put that buckle away.

I’m not telling this story for anyone to say how great Brian is….but to point out let’s start doing what is right by society.   I would hate to forever look at that second Umstead buckle and know I took something by deceit.  To me that second Boston medal and the internet attention it has gained will forever tarnish this runners accomplishment.

When I earned my second Umstead buckle…I mailed in my request and paid the”extra” $35.00 for it.  It arrived yesterday!  I earned this buckle and my wife earned it as well. 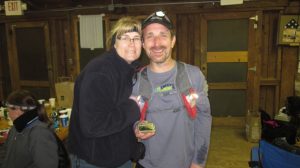 (Michele and I after my first finish)

I love you Michele…