Heading into my 2nd Umstead 100 I knew things were going to be different.  That first 100-mile ultra marathon race was a door to a whole new world.  It was also a door that I knew I would have to pass thru pretty much on my own.  For that race I had my wife as my crew (her first-time crewing for me) and my good friend George and new friend Ben as my pacers for the final laps.  Although I had run with George many times I really had no idea what to expect out of a pacer nor what I could ask for.  Running 100-miles was new and having a support team was new.  I finished that race well in front of my goal with a time of 22:51:05.  You can that race report here.

Umstead 2017 would be different for two reasons. One I would have a village behind me and the second I was running for someone else.  In the 3 years since my first adventure at Umstead a lot has changed.  I’ve grown a small social media following in the ultra running world.  I’ve moved to the Cary/Raleigh/Durham area of North Carolina, home to the Umstead race.  And I’ve become a member of an ultra-running family that cares for and supports each other.  I would enter my second third 100 mile race with a support village behind me.

This village did two things.  First, it set me at ease knowing I was going to be in good hands.  I had 100% confidence in my crew/pacers.  I also knew that I would have a larger extended support system out on the trails if things got tough.  That is one thing about the ultra-circle we run in, many are willing to sacrifice their race to help you if you are down and out. 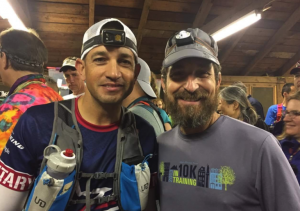 (Eric and I at the start)

Pre-race my support crew of Andrea and Elisa arrived at my house Friday night and after settling in we went over race logistics.  We covered my pit stop plans, what my re-fueling needs would be and pacing for the final 50 laps.  I knew that my crew would be dedicated to my success but I was a bit overwhelmed with the level of sheer desire I felt from them to help me reach my goals.  These were not two girls who had been suckered into helping me, I could tell they were bought into my success and cared deeply for me.

My plan was to run the first four laps at sub 2:30 per lap pace.  This would deliver me at the halfway point at 10 hours.  From there I would pick up pacers for the remaining four laps, Elisa would run lap 5 and 6, Andrea lap 7 and 8.  My goal for these final fours laps was to run at a sub 3:00 per lap pace.  This would have me finishing at 22 hours, 51 minutes ahead of my PR. 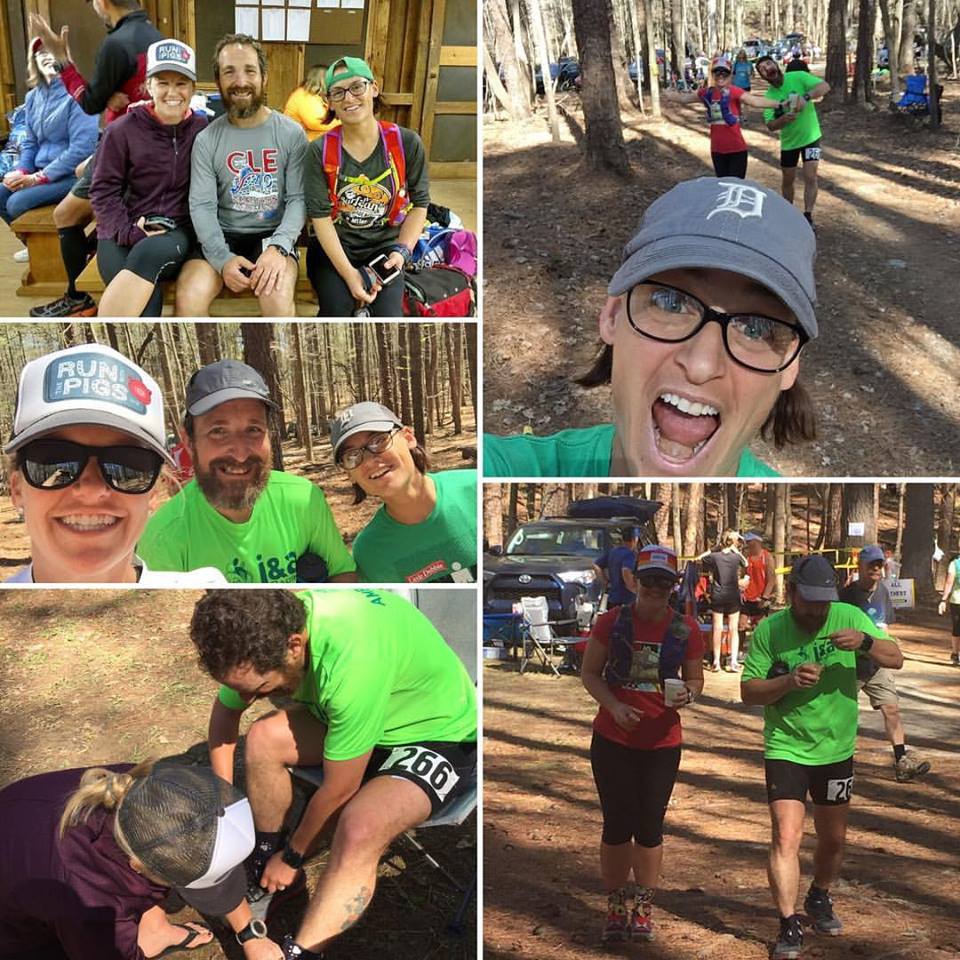 Pit stops would be as fast as possible.  I told the girls during these stops, as much a possible I did not want to stop moving.  I created lap bags each containing the food, meds, and snacks I would need for the next lap.  We also made plans to take advantage of our ideal pit location (red dot on map) where I would see them twice on the completion of each lap, once going into the HQ loop turn around and again on my way out.  On the inbound leg, I would hand them my water bottle, and any requests I had for the pit stop.  These girls were on it… 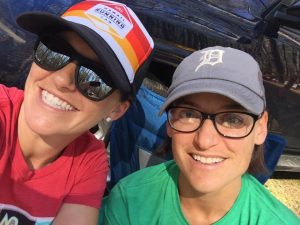 When I returned on my way out they had everything lined up and ready to go.  Since I was picking up rocks in my shoes they had a chair ready and removed, cleared out and had my shoes back on in seconds.  Once back on my feet one or both would walk along with me as I took on food/meds until I was ready to be on my own again.  They were FLAWLESS!

I kid you not over the course of the day I was off my feet maybe 15 minutes…and I doubt if it was that long.  I owe them a ton of love, respect, and thanks.  I knew they were going above and beyond the call of duty when I heard one of them in a the middle of a shoe clean out say, “I don’t even touch my husband’s feet.”  These girls will forever be my trail sisters.  Much love and respect.

The first four laps went off much as I wanted except, it was hotter than we liked.  I say we since I was running with a good friend Eric H.  Eric is a few years younger than me, and in all fairness in much better shape.  What I had on him is experience.  I have several runs over the 50-mile distance…including two 100 mile finishes.  Eric is much faster than me but had yet to pass the 50-mile mark.  My goal was to slow him down on the opening 50 without cramping his style while gaining from the faster pace.  I knew it would be a delicate balance.

It worked…  We ran together, told stories, talked about life and the later stages of the race.  The best thing was that we achieved all of our pacing goals without blowing out my legs or without messing with his cadence.  I really enjoyed the miles we spent together.

You can read Eric’s recount of the race here.

Half way home and this is where the race gets serious.  During our 50 mile pit stop and a few after that I would look over at Eric and he did not look so good.  I got in and out so fast that many times I was a good way down the trail before we would catch back up with me.  In the later stages although he was running strong I wondered when the wheels might come off for him.

I was not ready for the wheels to come off for me.  On the return trip from the airport spur I got very concerned.  Over the course of maybe 3 /4 of a mile I got hot.  I felt weak.  I struggled to keep up my leg turn over.  The next thing I knew I had fallen off the back of our group.  Eric and Dewy (his pacer for the final 50) and Elisa were a good 50 yards in front of me and I was losing ground.  I had been drinking and eating…so I had no idea what was going on but a wave of heat had overcome me and I thought for a moment that this is how the race begins to come apart.  I made my way back to the intersection of the headquarters loop and the main trail.  Slowly I cooled off enough to stay at a steady pace knowing that if I could make it to the first unmanned aid station…there would be cold water to help with my condition. 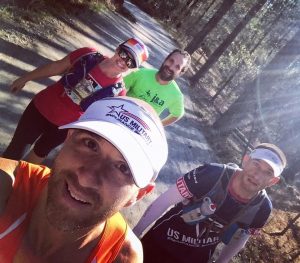 (It was some where around here that it (I) got hot…)

Looking back on lap 8, I think I gave up on myself.  I knew I had a good time in the bank, my legs were fired, my left Achilles (which had been hurting nearly all day) was killing me.  During that last lap, I gave a little time back to ensure I did not blow up on the final lap.  My main goal for the day was to finish…because this race I really ran for someone else.

My mom had a hard life.  Things did not always go as planned for her.  She made the best of her situations and lived life on her terms.  She tried her best to provide for my sister and I but she was a single mother when it was not cool or had the support of the community.  Still she worked hard, and gave up much of her own dreams to provide for us.  And She was always there for me.  She was not fond of my running extreme distances fearful I would hurt myself.  After-all “I was her little boy.”  Although concerned she always wanted to hear in great detail about my adventures.  I would often call her from the starting lines of marathons, during races, or after the Grand Canyon to tell her where I was.  Nancy Jane Burk, I miss my Mom

She was on my mind all day.

I wanted to finish for her… 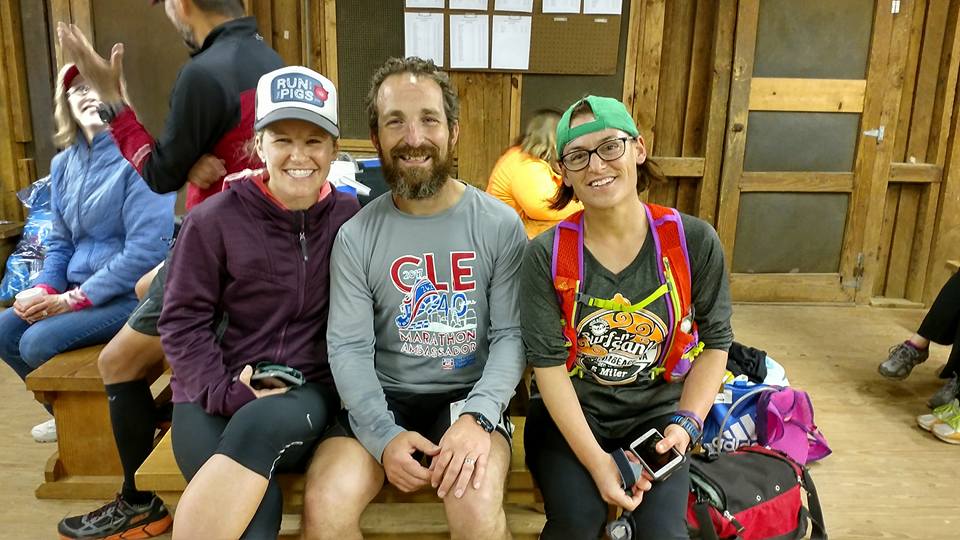 (To My ROCK STAR crew, Elisa and Andrea, Thank you!)