No other athletic community is like the running community.  Whether running for fun or racing a ultra-marathon, full or half marathons and right down to the 5k, runners a special breed of people.

What other community toils away at their craft in near obscurity?  Would Arron Rogers pay to play football in an empty stadium?  Would Michael Jordan have played for free in the middle of a city park, unnoticed by anyone?  Yet 99% of all runners, even world class athletes train and run unnoticed by the majority of the world.

In what other sporting endeavor does world class talent compete on the same course, play on the same venue, and run the same miles as the last place finisher.  The average baseball player will never be able to take the mound and pitch an inning in Yankee stadium.   The weekend tennis player will never be able to serve at Wimbledon.  Yet week after week the average runner toes the same line as the Olympic qualifiers, world record holder or world major marathon winner.

[Tweet “Brian @cledawgs shares his opinion on why the running community is the best.”]

The “community” of runners is part of the story I tried to capture in my book Running to Leadville.  For those unfamiliar to the sub-culture of ultra-marathon this book uncovers the unique relationships in the running world.

The running community is unlike any other in the world.  We run the same races, cover the same ground, run against the same clock as the professionals.  The last place finisher will cover the same 26.2 miles as the winner of the Boston marathon.  The last person to cross the line in Placer High School in Auburn, Ca would have ran the same Western States 100 course as past winners Ryan Sands, Kaci Lickteig, Rob Karr or Hal Koerner.

In what other community would you see the final finisher, just beating the cut off time celebrated as much as those who won the race. 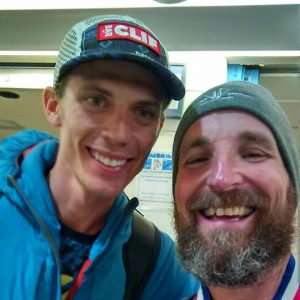 The running community is (in my opinion) the most supportive community I have ever been associated with.  From the local running clubs, to the regional elites to the world famous runners who I’ve had the pleasure of meeting.

Each has been very humble, supportive, welcoming and down right wanting you to do your best,