JFK 50 – Seems like only yesterday I was filling out an application by hand, writing my name on an envelope, applying a “Forever” stamp and mailing in my request to run the oldest continuously run ultra marathon in the U.S.   Now as you read this I’m sitting back trying to collect my feelings about my finish and this race.  I’ll start off by saying this was an awesome event.  I found the race very organized, well supported and everyone I came into contact with was very welcoming.  I also found this race more challenging then I had anticipated.

My JFK 50 plan and goals were previously posted here. 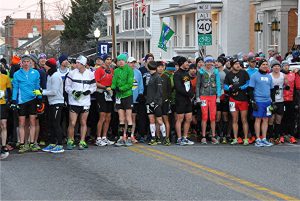 The Start
(Photo by Joseph Stretanski)

Bottom Line, I finished my first running and the 52nd running of the JFK 50 Mile Endurance Race in 10 hours, 06 minutes and 27 seconds.

The Start and the Appalachian Trail section:  Race morning began with a pre-race briefing in the Boonsboro high school gym and then a short walk to the center of this historic town.  Up to this point this felt like any other early morning race, even with the chilly (19f) temperatures.  Once standing in the center of town, listening to our national anthem, things got real.  All of a sudden it hit me, I’m running the granddaddy of all ultra races.  This thought barely had time to sink in and the gun went off.  As we made our way out of town, I remembered I had trained hard, was in good shape and happy to be finally running this great race.  In the early steps of the day, I believed I was ready for anything.

Video note, I smudged the lens with my glove at some point and did not realize it until after the race was over.

Myself along with the pack of nearly 1,000 runners made it’s collective way out of town.  It wasn’t before long that I noticed that the road began to rise.  What I was not ready for was the opening miles running uphill on the roads leaving Boonsboro and approaching the AT.  Some how I missed planning for this <sarcasm> “easy” </sarcasm> section.  I knew it was very early in the day and with the excitement and the increase in elevation my heart rate was going up faster then I expected.  I soon began to worry about burning out to early.  Wanting a tapered start I choose to fast hike some sections of these early miles, reasoning that any time I lost here I would be able to make up on the flat/tame tow path.  Little did I know what shape I would be in when the tow path came around. 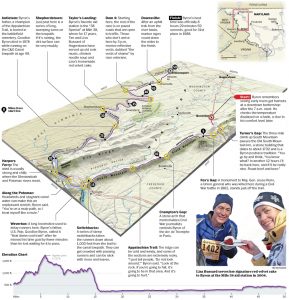 Timing Mat #1, Start of the AT, 30:37:  Honestly I had no idea what to expect from the AT section.  I knew there would be some climbing, I knew there would be some down hills and I knew the footing would be challenging.  Once on the AT, I was ready for the challenges I’ve previously mentioned.  I was not ready for them all at once.  I was also not ready for the narrow passing lanes.  I’m not trying to imply that I’m a fast trail runner, but at this point I was ready to make up some ground.  Even with the challenging footing I felt like I could run a quick if not steady pace.  The only problem was the single track trails made it difficult to get around people.  I lacked the confidence to pull out of the single file lines to make any forward progress.  At times I also felt like I was holding people up.  The footing on the AT was much more technical then anything I had run on before, this slowed down some of my progress early on.  It was only when I was able to link up and tag along on a fast moving train of other runners was I able to make up some time.

As hard as the AT trails were I enjoyed the challenge as it kept my attention the majority of time.  The few times my mind/attention did wander off I was abruptly called back to reality by a miss placed step or a toe impacted right into an awaiting rock.  I caught myself from falling a number of times but never made contact with the very jagged and hard rock surface of the trail.  I did witness a few other runners who were not so fortunate.  The miles on the AT passed relatively fast as there was not a lot of idle time.  Exiting the AT would offer up one more opportunity for disaster.

Approaching the exit stage of the AT, “Weaverton Cliffs,” a course marshal was posted at the beginning of the infamous switchbacks.  This section was fast, steep and required all of your focus.  The very attentive marshal offered up some words of warning.  “If things are going to go bad for you, it’s going to happen here and it’s going to happen FAST.”  And he was not lying, the switchbacks were fast and had very little room for error.  One wrong foot placement, one miss step or rolled ankle and you would have been tumbling down the AT trail with a resting place among the trees, rocks and potentially on a landing surface 100 feet below.  During this section my eyes were glued to the trail and the shoes of the runner in front of me.  A crash on this section would have been bloody and ugly.

NOTE:  It was reported that one unlucky runner met such an unfortunate fate.  I heard after the race that a JFK runner tripped on these switchbacks and in the fall the gentlemen suffered a busted lip, banged up nose and swollen face.  Reports had him tripping on the switchbacks and going face first down the side of the trail and slamming into a tree.  After first responders patched him up, he proceeded on to the C & O Tow Path and ran another 36 miles.  Witnesses said it was very bloody, later I was glad to read this 68 year old Vietnam/ Marine Corp veteran finished his 26th JFK, but had to dig deep after the fall.

The Canal Path:  Approaching the Weaverton aid station I could finally divert my attention to something other then foot placement.  At less then a third of the race distance, at 15 miles in, I could not believe how compromised my legs felt.  My thighs/quads were wasted, it felt like I had just completed 10,000 squats.  My legs felt heavy and weak, just when I needed them to come alive.  I just could not believe I had 35 miles to go.  My legs were a complete mess.

In my initial planning for the race I had a goal of getting off the AT in under 3 hours.  I came off the AT much slower and in much worse condition.  I knew this section was going to be challenging after all we have nothing like these conditions around the 757.  To counter this I planned some training time in the mountains, but these got cancelled for logistics and support reasons.  Knowing all of this I hoped that surviving the AT I could make up some time on the tow path.  But with the state of my legs I had to settle into a 10 minute run and 2 minute fast walk pace to gain some recovery for my beat up wheels.  This was very humbling, but at the same time just what I needed to rebound.

The next 27 miles of tow path running were spent playing mental games within myself adjusting my running/walking routine to pick up the pace to gain back some time that I felt I lost on the opening sections.  Slowly life came back to my legs and my spirit.

The support along this section was outstanding, the majority of the miles were very lonely with limited crowd support but when you did come across an aid station the energy and enthusiasm propelled you over the next few miles.  I found all of the volunteers very supportive.  I also came across some very interesting characters along the way.

I missed out on the red velvet cake, at the 38th mile aid station.  I was battling with my stomach just a bit and although this cake looked wonderful, I just could not bring myself to try any and risk upsetting my stomach along the trail.

Timing Mat #3, End of the Canal Path: (No Time Reported)

The Road to Williamsport.  Coming off the tow path it was refreshing for my feet to impact and run on pavement.  The level surface was welcoming, it made my legs feel fresh and alive…unfortunately that only lasted a short time.  These finishing miles are run over very rolling terrain that normally I would be able to power up and accelerate down.  In the closing miles of the JFK, after a beating from the AT and the droning of the tow path, I had to settle with fast hiking up anything that looked, smelled or may have been an uphill.  I was able to run the flats and down hill sections, pleasantly surprised that I was able to keep up a solid 9:00 mile pace while  averaging my mile splits right at 12:00 miles.

As the miles clicked off I found myself struggling with being able to put the hammer down.  I tend to run conservative not wanting to burn out.  As I neared completing this run with only single digits left I could not mentally sell out.  I ran mile 45 and 46 continuing to conserve my legs and lungs to guarantee a finish.  Although I was well ahead of a cutoff, I still feared not having enough in the tank to complete this race.  It was not until mile 47 that I finally sold out and ran as fast a pace as I could muster.  The final right hand turn provided an awesome sight seeing the finish line within grasp.  Then it hit me….an up hill finish.  “Who in their right mind finishes a 50 mile race with a up hill….you got to love this.” 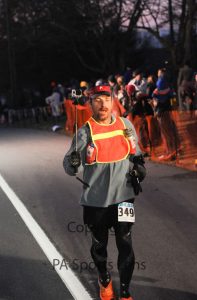 Whatever the reason I’m very proud of my finish, 415 out of 912 starters, 10 hours 06 minutes and 27 seconds.  I toed the starting line hoping for a sub 10 hour finish…without truly understanding the challenge the JFK 50 offered up.  I crossed the finish line knowing I met every challenge throw my way.  At points I wish I would have done better, wished I had been better prepared but knowing I gave it my all.  Will I come back for a rematch….I said a number of times that this may be a race where I’m one and done.  But the JFK 50 offered up another challenge, can you do better? 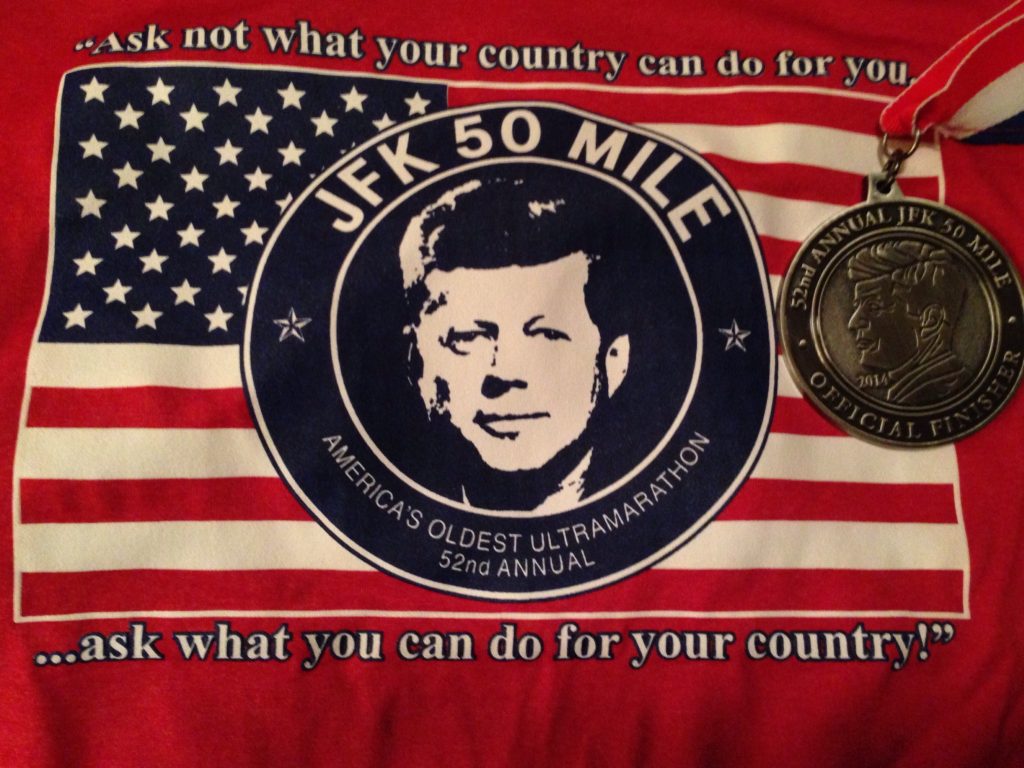 As always my loving wife for supporting my crazy adventures.
Chris and Brad for the ride to the High School….Congrats on your finishes!
Brad and Vickie for the ride back to the hotel…Thanks so much!