Running a sub-four hour marathon in a dream location.  There are some races that you size up and target for a good day.  The elite runners call them goal or feature races.  Coming off my second sub four-hour marathon at the City of Oaks Marathon in November, I wanted a spring race that would provide an opportunity to repeat that performance.  Myrtle Beach Marathon with is advertised flat and face course seemed like the perfect stage for another sub four or maybe even a new personal record.  Myrtle Beach Marathon on March 4th become my feature race.  Then the winds of fate had their say. 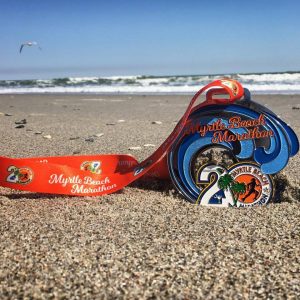 With a fully loaded race calendar I opened the doors on the month of February on target and hopeful of a good showing in the March marathon.  Then during a simple five-mile run my right calf painfully locked up for the second time in five days.  It was if the cold hand of the Grim Reaper himself reached out and put the touch of death on my spring running plans.  I was days away from a 40-mile mountain race and a month out from my goal race at Myrtle Beach.  I thought for sure all was lost.

With much uncertainty, and after three weeks off I nursed myself back and toed the line at 6:15 a.m. on a cold Saturday morning.  I stood there in the corral amongst numerous others complaining about the cold.  Also weighing on my mind was the fact that my longest run in the last four weeks had been a paltry eight miles.  I questioned if I would get through this race in one piece.  I also questioned if I would be smart enough to limit the damage if something did go wrong.  One thing for certain I would find out soon as Myrtle Beach offers a flat, fast and fantastic marathon experience. 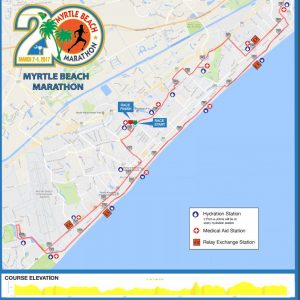 FLAT – With Myrtle Beach’s relatively flat course I was thankful I would not have to put my calf to the test of climbing a lot of hills.  From the get go the course lived up to its billing.  What elevation changes the 26-mile course could offer up could have been measured with a 25-foot tape measure.  At the end of this race I would not have the excuse that I lost time on the hills.  In fact, during the race my main thought was wondering if my right calf would let me finish.  If my wonky calf held up I was determined to not leave anytime on the course.

FAST – Heralded as South Carolina’s fastest marathon course, I believe that statement to be 110% true.  Outside of the already mentioned flatness of the terrain, there were no awkward sections of the course that I felt cost me time.  Yes, there were a few out and back sections but those had wide sweeping turns that did not bog down my leg turnover or cadence compared to some races I’ve run where I had to downshift into first gear just to get thru the hairpin curve.

If you’re looking for the BQ time or a personal record I can’t think of a better venue them Myrtle Beach.

FANTASTIC – I had a great time in Myrtle Beach.  From the expo, where for the first time I was there as a vendor promoting my recently release book Running to Leadville, to the starting area, the course, the finish and the local community support.  Everything was spot on…normally at some point during my previous races there had always been a moment where I said “what the heck was the Race Director thinking?”  But I failed to have that moment this weekend.  My wife even commented that I did not have my typical race blow up moment this weekend.

I honestly had a great time at this race.  I met a lot of nice people at the expo, got to hang out with a great Running store with Roanoke Island Running Company, sold and signed a few books and ran the entire race without calf pain.  I had a FANTASTIC time in Myrtle beach and running the Myrtle beach Marathon. 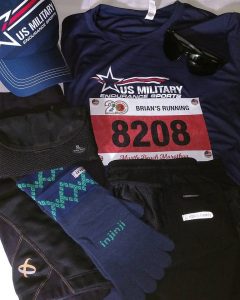 RESULTS: My calf was never an issue, I might have felt it around mile 8, or it may have been my mind playing tricks on me.  I ran a perfect race, kept my pace under control, refueled before it began an issue, stayed on my hydration plan.  The result…a marathon personal record time by over two minutes.  I ran a 3:56:06 at the City of Oaks, at Myrtle Beach I bested that time with a 3:53:47 cutting 2 minutes and 19 seconds off my time.  More rewarding for me was that I was able to back up my 2nd sub-four-marathon 3 months later with my third, SUB-FOURS back to back.

When I posted on Facebook live how happy I was with my sub-four finish a number of running and non-running friends asked why I seemed so happy.  I normally don’t judge my race times against others, or against established times by other runners.  For me the sub-four marathon is the mark of validation that I’m a serious marathon runner, or serious runner in general.  I’m not implying that this standard is a measure on others…it is a standard I impose on myself.  It’s a point of validation for me and me alone.

My thoughts on pre-race nutrition and race strategies on aid stations. 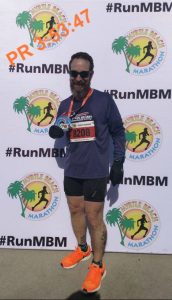 EXPO:  This was the first expo where I was part of the event.  I had the great fortune to hanging out with Shane and the Roanoke Island Running Company who helped me make my book Running to Leadville available.  I also got to meet a lot of great people.  If you would like a signed copy you can get one direct by clicking here.

A sub-four-hour marathon for me is victory…