My opportunity to run the Clearwater Distance Classic Marathon came about when my boss knocked on my office door and announced “Do I have an opportunity for you, and it includes some travel.”  After accepting the “opportunity” my runners brain kicked into high gear.

Did I familiarize myself on the topic of the work related opportunity?  Nooooooooo

Did I make travel arrangements?  That could wait!

Did I tell my wife, DUH, I’m a runner, but I’m not crazy, I told my wife then I did the next best thing.  I scoured the internet looking for an “opportunity” to race while away on business.

The Clearwater Distance Classic provided a few race options, the Ultra 50k, the Marathon, a Half-marathon, a 5-miler and a 5k.  I choose to run the marathon for a number of reasons.  Namely, I didn’t want to beat myself up 2 weeks prior to running “the Light 2 Light 50-mile race” in the Outer Banks.  The marathon seemed liked the perfect compromise for me.

[Tweet Read about “Brian’s aka @cledawgs marathon run at the Clearwater Distance Classic, did he score another sub-four?”]

Arriving in Tampa around noon on Saturday I hot footed it from the airport over to the Expo to pick up my race package.  The expo was located at Coachman Park in Clearwater on Saturday and Sunday morning before the race.  Most races do not offer race day packet pick up and I was thankful this race did just in case I was faced with some travel issues.

After surviving the winter blues the last few weeks in Virginia and North Carolina where temperatures dropped into the teens,  it was very nice to have race day “morning” temps hovering in the mid 50s.  I arrived on site early enough to get settled into my racing mood, listen to some old school rock & roll (“summer breeze makes me feel fine….”) and watch the race day crowd gather.  When it was time to line up for the start of the race I positioned myself among a pack of runners behind the 4-hour pacer.  I had no real goal in mind for this race.  I didn’t taper, I didn’t eat all that well prior to the race and I really had no agenda in mind.  I viewed this race as an opportunity to check “the run a marathon in Florida box” and have some fun along the way. 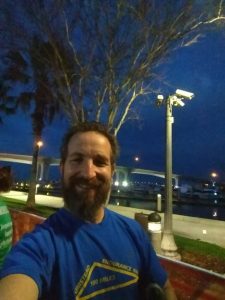 The starting line provided a wonderful back drop with the Clearwater bridge in the background.  As wonderful as this was for my pre-race selfie it also reminded me that although this course was pretty flat, we had to cross two of those bridges enroute to our 26.2-mile finish.  The Clearwater bridge would challenge us at the 1-mile mark.

Moments before the National anthem was sung I finally arrived with my race day plan.  I decided to hang with the 4-hour pacer until around mile 20 or as long as I could.  My mind set for the past few marathons has been to pace myself in the early miles so that I have something left in the tank to “put up a fight” in the end.  The gun went off and the game of follow the leader was on.  For 17 miles I hung back from the 4-hour group but close enough to keep them in sight.  This tactic did wonders keeping the pressure off as we made our way through aid stations and bottlenecks along the course.

Overall this course provided some stunning waterfront views.  I enjoyed running along the beaches, among the stately homes, through the shopping district and enjoyed the many picturesque views while crossing the water ways.  The only part of the course that got tedious was the very long stretches where it felt like we were running along one seemingly endless road.  There is no way to sugar coat it, that is just what we did.  In hind sight this forever out and back loop made the miles click off almost unnoticed.  Before long the 17-mile marker came into view and I wondered where the miles had gone.  We reached the single digits without the droning count down of time and distance.  The latter stages of the race came about without any major mental hurdles it was then that I noticed I had some life, some spunk, some fight and vigor left in my legs. 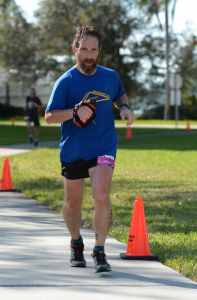 It’s always a scary when you swing out from behind the pacer and decide to make a move.  When pulling away on my own I always wonder, is it the right time?  Can I hold up?  Will I hit the wall down the road and regret my move?  Fear creep into my spirit as I wondered what would happened if I fell off the pace, as I have in the past, and they caught me in the waning miles?

Today this was not going to happen.  Over the next nine miles my legs never let me down, my rhythm never seemed to change.  My plan was working to near perfection.  As I ran past the 20-mile sign and punched a hole in “the wall” a new thought came to the forefront.

It was time to attack.  Once clear of the pack I drafted off of anyone who could break up the wind in front of me.  I focused on chasing down the runner in front of me, then the next, the next and the next runner after that.  Silently I counted the number of runners I caught from behind and used this game as motivation to push even harder to add to the tally.   Then it happened, I could hear them approaching from behind.  I could hear them talking at first.  The conversation grew louder and louder.  Next I could hear the sounds of their footfall reeling me in.  My. Heart. Sank.  I was caught by a much younger couple who were making great time.  Fear departed my battle wore brain when it was apparent that they were the only ones in hot pursuit.   I did the only thing I could, latched on to their hip and used their energy to pull me along for the next two miles running at below a 8:20 pace. 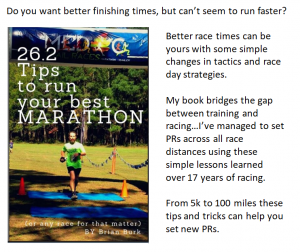 Some times running a faster race time is not about running faster…it’s about tactics and race day strategies.  My book 26.2 Tips to run your best MARATHON (or any race for that matter) can help you set new PRs and run your best races.

I ran the following miles and up the remaining hills as fast as I could and cannon balled down the downhill’s.  I dreamed up every motivational tip I could to get every once of speed, to quicken my leg turnover, to fuel my rapid succession of footfall and cut every corner to shorten the race.  I ran the remaining nine miles in a fashion that would make anyone proud. 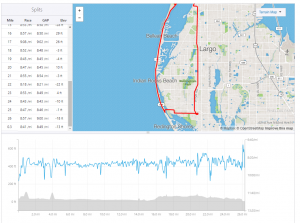 I gave the closing miles of this race everything I had.  I ran hard…and I pushed myself to run a touch quicker.  I ran into an uncomfortable zone and did not let up.  As the race came to an end I could feel a crash coming on but I continued to fight all the way to the finish line. 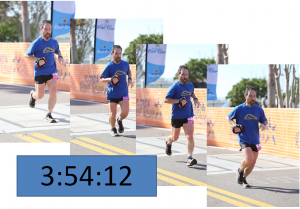 After all of this I came up short of my PR, while running my second fastest marathon and my 5th sub-four finish on a day I would have been satisfied to simply finish. 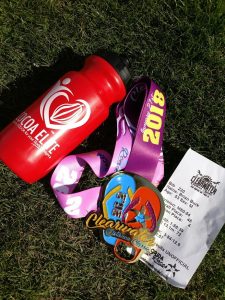 I may not have declared a real goal to the world but I reached both of my unofficial goals just the same…I wanted to run a race in Florida, and I wanted to have fun.  Opportunity accepted,  and taken advantage of.  Thank You Boss!

I’ll next challenge the sub 4-hour marathon mark and my marathon PR at the Myrtle Beach Marathon (BBMBM) and the Cleveland Marathon, (BBCLE10) come run one of these great races with me using the discount codes for a special discounted entry fee.