We have all been there, whether it’s another New Year’s Resolution, a bad performance report at work or a new number on the scale…we have all declared at one time or another that we wanted to change something about ourselves.  We wanted to engrain a new habit.

BUT we have all at some point or another failed at making that change.

So how can you increase the odds of making that new habit, lifestyle, of fitness routine stick?

Start small by taking a small step every day.  When you start with small, easy tasks, adding another small task will seem fairly easy until you’ve paved your way to your end game.  For example, say you have a goal of running 3 miles.  If you start by trying to tackle 3 miles off the bat when you’re not used to running at all, you’re destined to fail because it will be too challenging.  But if you start with a walking routine, you can easily do that for a week or so until you’re ready to introduce a small amount of running.  Then, increase the length of your run over your walk until your running more than walking.  In small bites, you will be running the 3-miles you originally had as a goal. 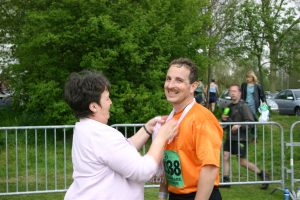 Make it easy.  Set yourself for the win.  If you want to eat healthily, have cut-up fruits and veggies on hand for easy access. If they are not prepped, it’s so much easier to grab something else that’s quicker (and often less healthy).  Or if you want to go for a walk in the morning, get out all of the things you’ll need for your walk the night before.

Reward yourself with something you really want.  You have to want the reward.  Really want it.  When trying to replace an old habit with a new habit, it can be hard to visualize why that new reward is so important.  Focus on why it’s important to you.

Be ready for failure.  It seems counterproductive to plan to fail but when it comes to forming habits, there are bound to be unforeseen setbacks and things that come up that are beyond your control.  Have a “plan B” in your pocket, not as an easy way out but as a backup plan when the world tosses you a curve ball.

[Tweet “Want to change your life? Start by building a new habit into your daily walk…”]

Don’t settle for just a “New Year’s resolution,” habit building should be a continuous part of improving your life and these tips will help you learn how to build habits once and for all.